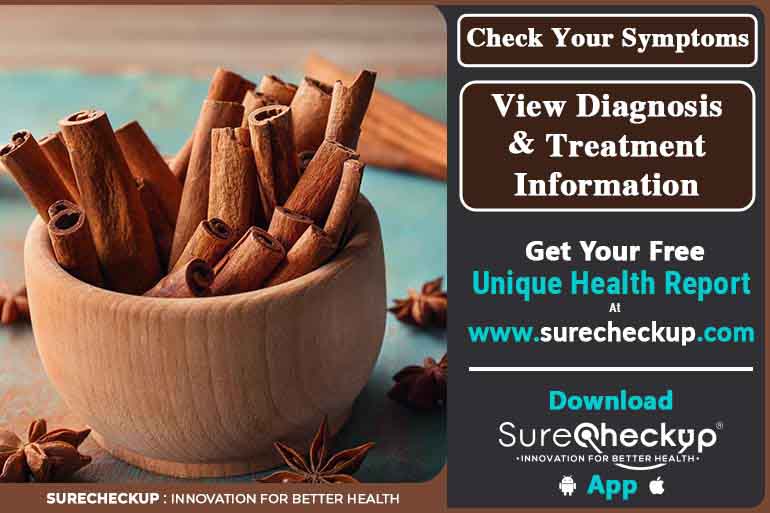 Introduction:
Cinnamon is a spice. It is often used differently in every home. Cinnamon is the bark of a tree called 'Cinnamon'. Thin cinnamon is considered good.

Properties:
Cinnamon is spicy, sweet, soothing to the throat, short, arid, slightly bitter, slightly hot and bilious. It is used for cough, flatulence, hiccups, cough, vomiting, heart disease, eczema, thus, pinas (a disease of the nose), metallic, aphrodisiac, antiseptic and antiseptic. In addition to being a stimulant and contraceptive of the uterus, taking it after childbirth normalizes the uterus in every way. It cures all types of fever and cleanses the body. Apart from that it is also beneficial and stimulating for the heart. It removes the weakness of the heart and strengthens it.

Usage:
(1) On aching teeth: Apply a few drops of cinnamon oil on the pole (Rs.) Two-three times a day.
(2) On cold: Put cinnamon, pepper and ginger juice in cinnamon and pepper powder and drink the juice twice a day.
(3) Consuming it in small quantities proves to be spermicidal and vaginal, but taking it in large quantities should be considered as destructive and impotent.
(4) It stimulates and nourishes the heart by taking small amounts.
(5) Insomnia is relieved by taking small amounts.
(6) Stomach cramps are relieved by taking a small amount.
(7) Drinking a decoction of cinnamon cures vomiting.
(8) Cinnamon is useful in menstrual problems of women. Cinnamon helps in cleansing and re-contracting the uterus.